Kanchenjunga southern base camp trek will begin after your arrival in Bhadrapur. You will be able to spot some tea houses along the trail as you get closer to Bhanjyang. You will be passing the Taplejung village where you will be given some time to wander around. After the town, you will be heading down to the airstrip of Suketar. As you trek on the trail, you will be going through pristine forests and rushing river and not forgetting the panoramic views of the four highest mountains which is Mt. Everest, Mt. Lhotse, Mt. Makalu, and Mt. Kanchenjunga.

If you like to see rhododendron blooming, you will get a chance to see it during springtime. As the place is not well developed, you will find yourself sleeping in dormitory sleeping beds and having local foods and bread. Wonder how the people make a living in Kanchenjunga south base camp trek trial? Their primary income is from cardamom, is a spice which is made from the seeds of several plants. You will be able to see it in almost every village you pass in. Besides as a trekker, are you a wildlife lover? If you are, don’t miss the chance of seeing snow leopard and musk deer. You may be able to spot one if you are lucky. 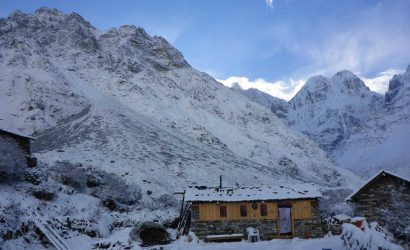